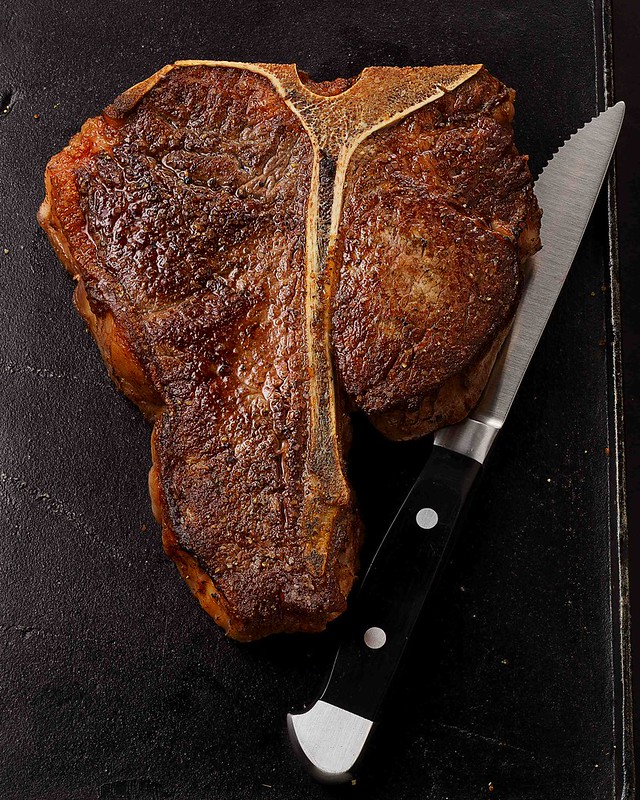 There is something magical about meat cooked with bones, it is not just the sheer pleasure of enjoying Flinstonian meat in front of you. No, the bones impart flavor and moisture to the meat, which is why T-bones and porterhouses are the undisputed kings of America's largest steakhouses. Go buy the thickest steak you can get, even if it means begging the butcher to show you a steak that fits you perfectly. This is a caveman's diet, just a touch of delicacy. Basically two steaks are combined into one, Porterhouse steak, cut from the short loin of a steer (usually), with a steak on one side of its T-bone and a New York Strip on the other side. Porterhouse provides a large plate of meat, usually enough for two to share, and has become a staple of American steakhouses.

To become an official Porterhouse (rather than T-bone), the USDA requires steaks to be cut to a thickness of no less than 1.25 inches, which usually translates into 16-ounce servings in restaurants. However, it can be larger, and 24-ounce and 48-ounce Porterhouse steaks (approximately 1.5 inches and 2.25 inches, respectively) are also common on steakhouse menus